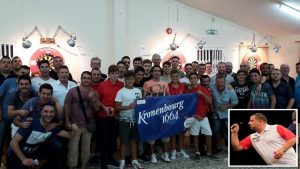 Dylan Duo claimed his first ranking title of the season. He managed to take out some top opposition in beating, Shane Israel, 10x National Champion George Federico, Tony Dawkins and current National Champion Dyson Parody, to book his place in the final.

Dylan and Dyson- The match started off with both players getting to a quick start hitting each other with some heavy scores. The game quickly turned 2-2.

7th leg- saw Dyson to leave himself on 140 which he missed on D10 to check out, but then returned to the board to hit it first dart.

8th leg- Dyson started the leg off with a ton followed by a 180, Dylan replied in kind with a 180 of his own, Dylan eventually took out 56 to book his place in the final.

This semi final match up, was a very one sided affair with Manuel dominating the match, vs an experienced Justin Stagno. Manuel maintained a healthy standard with Justin failing to produce his best darts in the semis. Final result 5-0 win for Manuel Vilerio.

1st leg- Dylan wins the bull and starts the match. Dylan showed a heavy display of scoring to leave him on 46 which he took out for the first leg (1-0).

8th leg- Dylan takes out a 70 check out to claim the title with a 6-2 vs top class opposition in Manuel Vilerio.