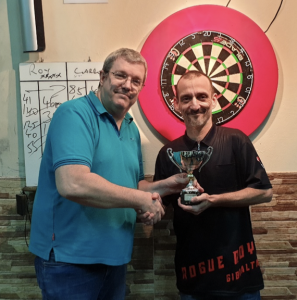 Roy Asquez claims his 1stranking title with a hard fought 6-2 victory over Carlos Munoz to win the 4thranking event of the 2018/19, the College Cosmos Singles.

Neither players had easy routes to the final with Roy beating Denis Sheehan 4-0 in the 1stRound before taking on Justin Broton in round 2. The 2018 Gibraltar Darts Trophy qualifier overcame the 4thseed Broton 4-1 which set up a board final versus 5thseed David Francis, coming through that with a close 5-3 victory.

The final itself started with both players scoring well however both felt the pressure when it came time to finish, after 4 legs Roy & Carlos held their throws at 2-2. Carlos was unable to capitalise on some errant arrows at doubles from Roy in leg 5 & with Roy continuing to find the treble 20 managed to break throw to take a 4-2 lead. Roy maintained his steady scoring & after holding throw in leg 7 managed to break Carlos once more to take the final 6-2.

Many Thanks to the 33 players who took part, here are the ranking standings after 4 events played.