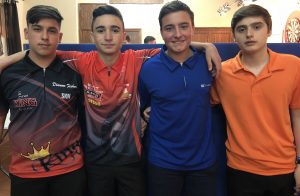 First Round
In the first round we saw comfortable 3-0 victories for Dylan Duo Jnr against Nico Bado in the battle of the youngsters, Dylan De Los Santos over newcomer Casey Dyer, Sean Negrette against Jayc Alecio and Jerome Chipol against Elton Victory. Other results saw Kaylan Franco defeat youngster Joseph Borge 3-1 and Joseph Ward defeat newcomer Evan Durante 3-1. The stand out game from the first round was Justin Hewitt against Craig Galliano, Craig managed to get into a 2-0 lead in the game but Justin fought back and managed to overturn the game and won 3 legs in a row to win the game 3-2.

Semi-Finals
In the first Semi-Final match Sean Negrette managed to defeat the number one seed Ethan Smith with relative ease. Sean’s high scoring was too much for Ethan to handle as he won the game in straight legs 3-0.

The second Semi-Final game was a much tighter affair. Kaylan Franco who has been playing some great darts recently pushed Justin to a last leg decider, both players had the chance to win the game but it was Justin who held his nerve to book his place in the final with a 3-2 win.

The pair have faced each other in three consecutive finals and before today they had each won one tie each, but today it was Sean’s day once again, just like in the previous final his scoring and quick double hitting was too much for Justin to handle as he won the game 4-1.

Leg 2 – Justin manages to hold his throw by hitting D1 to level the game 1-1.

Jeremy Cruz caught up with the winner Sean Negrette after the final..

You defeated Justin Hewitt in the final for the second consecutive time and you only managed to drop one leg throughout the event, that was against Justin in the final, you must be really happy with the way you are performing at the moment?
“I am feeling very confident with my game at the moment, I am working really hard to achieve the goals I set myself at the beginning of the year. If I only drop 1 or 2 legs throughout the day it means I am performing well, but the most important thing for me is to win the games, regardless of how many legs I lose.”

This victory puts you second in the current ranking table, but most importantly it means you have now gained enough points to qualify for this years European Youth Cup, this must be great news for you?
“This is great news for me as this was my main goal for this season. Last year playing in my first European Cup I gained a lot of experience and it gave me a huge boost to improve my game, I think this time I will perform even better than last year.”

There is one event remaining to finish off the season, the National Champion event. Undoubtedly the most important event of the season, you must feel very confident going into this event?
“I am really confident going into this event, I have nothing to lose as I am not defending the title so I will give it my all to try and win. Its the most important event of the year as the winner will become the National Champion for the season, there will be pressure on all of us but I think it will be a great event and I am hoping I will perform well.”

Just recently the 2017 European Squad received the award for best local junior team in Gibraltar, this must have been a proud moment for you and for the rest of the team?
“Yes it was a very proud moment for myself and for the team. We became the first Gibraltar Darts team to gain a prestigious award like this one. This award shows that we worked hard in 2017.”

And Finally Sean, there are three players fighting for the fourth spot. It will be decided in the National Champion event who gets the final place in the squad. Personally, who do you think will handle the pressure more and qualify?
“Personally, I can’t answer this question as the three of them are great players and very good friends of mine. I think Jerome Chipol has more experience in these types of situation but it will be a very nervy day for the three of them, I would like to wish them the best of luck.”

Below is the updated Ranking Table.. 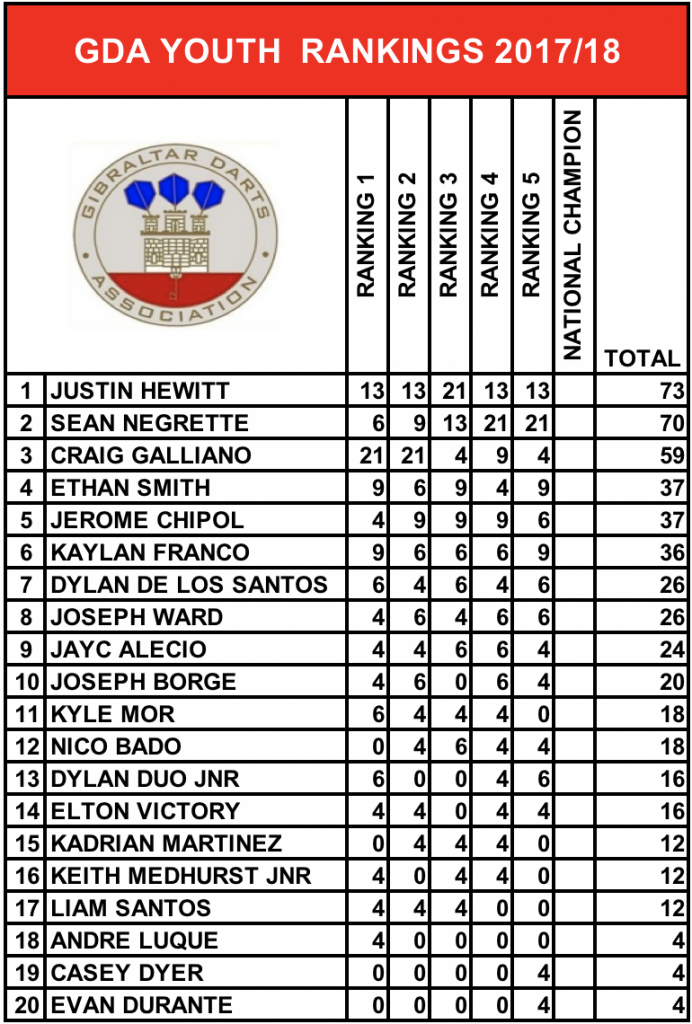