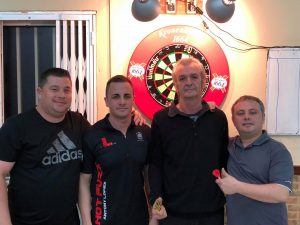 The GDA recently held its popular League Pairs event which saw a good turnout of 34 players, making 17 pairs. The format of the competition is “best of 5 legs, 501” throughout.

Board 2: Justin Broton & Manolo Vilerio secured their place in the final with a 3-1 victory over Shaine Israel & Alex Nuñez followed by a comfortable 3-0 win over Clayton Otton & Ethan Smith

Antony & Dylan win the Bull throw and start the match

2nd Leg – Antony starts well with a Maximum 180 but this was followed by doubles misses from Antony, Dylan & Justin before Manolo was able to checkout on Double 4 to level the match.

3rd Leg – Both teams scored well, keeping up with each other. This time Justin hit the Double 10 with his 2nd dart with his opponents trailing on 60.

4th Leg – Dylan showed his determination early on with a Maximum 180 and both pairs scored well. Manolo missed a Double 20 for the win which allowed Antony an opportunity to level the match which he was unable to do, also missing Double 20. Justin did not miss however and with the Double 20 checkout secured the win.