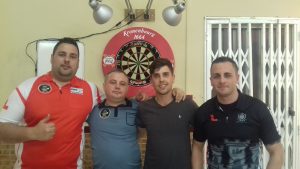 Board 1
No 1 Seed Dyson Parody cruised through his board winning all 3 matches without losing a leg, while No 8 seed Craig Galliano had a tough initial match Vs Sean Negrette which he managed to win 3-2 but ultimately Dyson proved too strong for him.

Board 2
Board 2 was not a lucky board for seeded players with No 2 Seed David Francis stumbling at the first hurdle losing to an very on form Jarvis Bauitista who went on to win the Board, while No 7 Seed George Federico narrowly lost 3-2 to Steve March in a high scoring match.

Board 3
Seed No 3 Dylan Duo got the better of Roy Asquez 3-2 in a keenly contested match, while No 6 Seed Justin Broton recovered from being 2-0 down in the first match to setting himself up for a Board final Vs Dylan. This was a close & tense match with some good scoring with Justin emerging victorious 4-2.

Board 4
No 4 Seed Tony Dawkins progressed though his early matches without much difficulty to find himself facing No 5 Seed Antony Lopez who had won both his previous matches 3-0. This Board Final was a very close affair which could have gone either way, and Antony clinched it 4-3 to book a place in the Semis.

A very close match with some high scoring / good finishing. Antony missed match darts but Dyson was able to keep his cool / secure the win 5-4

Another close match with both players on form, scoring and finishing well. Justin was able to push ahead and claim victory with a 5-3 scoreline.

1st leg- Dyson wins the bull and starts the match. Justin missed Double 8 which allowed Dyson to hit Double 5 and move 1-0 ahead.

4th Leg – After pushing ahead initially number of missed doubles from Justin allowed Dyson to close-up. Justin was able to hit Double 2 leaving Dyson sitting on 40. 2-2

5th Leg – Both players kept pace with each other with Dyson checking out Double 10 leaving Justin close behind on 50. 3-2

7th Leg – This leg seemed like Justin might be able to take a lead having just 68 left with Dyson trailing on 130. Dyson had other plans and produced 3 perfect darts T20 T20 D5 to check it out and move ahead once again. 4-3

8th Leg – This leg took much longer with both players showing their nerves and missing many darts at double with eventually Justin hitting Double 4. 4-4

9th Leg – Justin was eventually able to break throw for the 1st time in the match after Dyson missed a couple of match Doubles with Justin hitting Double 4 after earlier missing Bull for the win. 4-5

10th Leg – Justin was able to pull well ahead on this leg with some good scoring, hitting Double 20 on the first attempt with Dyson trailing on 192. 4-6

A well deserved win for Justin who claimed his first Ranking victory of the Season.