Dyson Parody claims his 2nd Ranking win of the season! 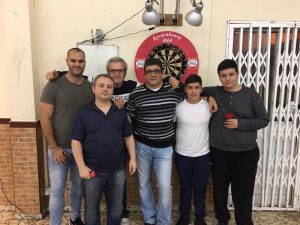 The GDA League Triples event enjoyed a great turnout of 10 teams in total. All members enjoyed the night of play with a very friendly atmosphere. The night belonged to the trio, who play their local darts for IPA Bolanos Darts Team. They represented their club well by not dropping a single leg throughout the night.

Sean Negrette, Joseph Ward and his grandfather Lesley Ward managed to produce the shock of the night against Dylan Duo, Justin Hewitt and Jerome Duarte. Sean, Joseph and Lesley were quick to punish their opponents, capitalising on their missed doubles. They quickly gained a 2-1 lead and a break of throw for the match. In the last leg Joseph Ward managed to make the difference by hitting a 180, this gave his team a healthy lead in the leg and led to Sean Negrete hitting the winning double.

The other semi final was a one sided affair with Justin Broton, Manuel Vilerio and John Martin, dominating their opponents with a 3-0 whitewash over, Kevin O’Callaghan, Nathan Old and Steve March.

In the final Manuel, Justin and John Martin faced up against Sean, Lesley and Joseph who produced an upset in the semi finals. But the IPA Bolanos trio made sure their run continued and they put in a fearless display which led them to claim the title with a 3-0 in the final.