A excellent turnout of 10 pairs and 7 trebles turned up for this friendly night of darts.

The night started off with the pairs event first. In the Preliminary Round we saw comfortable 2-0 victories for Dylan/Kayra Duo against Ibon Pachecho/Cristina Ruiz and Chris Dalli/Sonia Hermida against Keith Medhurst\Kyra Barea. 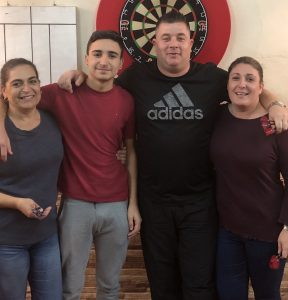 In the first Semi-Final match Dylan/Kayra Duo got the better of Harry Parody/Noemi Reyes with a 2-0 victory. The second Semi-Final was a tighter affair with Justin/Ruth Hewitt defeating Christian/Chloe 2-1.

The final promised to be a great one as both pairs had been playing brilliantly all night. In the first leg Justin managed to hit a crucial 180 which set him up nicely to take the first leg on double 16. In the second leg after heavy scoring by both Dylan & Justin, Dylan managed to leave himself on a nice 52 finish to level the game. However, Justin managed to take out 141 in brilliant fashion to take the leg and the 2-0 victory!

The night finished of with the Trebles event. Chris Dalli/Sonia Hermida/Des Darlington received a bye into the Semi-Finals. 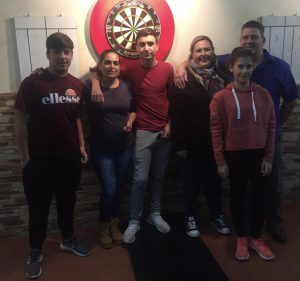 The final only looked like it was heading one way and in the end that proved the case, Justin/Ruth/Sean’s power scoring was too much to handle and they won the game with relative ease and took the title with a 2-0 victory against Harry/Noemi/Kacey.