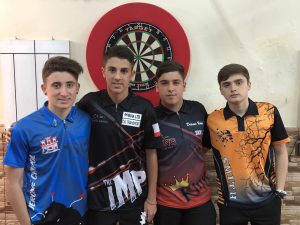 Quarter-Finals
In the Quarter-Final stages, Ethan Smith managed to defeat Dylan Duo Jnr in straight legs 3-0. In the second game Sean Negrette defeated Kyle Mor 3-0 and in the third game Jerome Chipol managed to defeat Nico Bado by the same scoreline 3-0. The final Quarter-Final match was the standout game of the round, Craig Galliano v Justin Hewitt. Justin who up to this event had played in all 5 ranking finals this year could not make it a sixth in a row as he was defeated by a brilliant performance from Craig, Craig fired in two 15 dart legs in his 3-1 victory over Justin.

Semi-Finals
In the First Semi-Final game Sean Negrette faced Ethan Smith. Ethan fought really hard to win this game and try to gain more points but he fell short in the final leg in which he missed a few darts to win the game, Sean won the game 3-2.

In the second Semi-Final game Craig Galliano faced Jerome Chipol. Jerome knew that if he would win this game he would gain more points than Ethan however, Jerome could not handle the high scoring from Craig in this game and lost the match 3-1 which meant that he would have to play a deciding match to see who would finish fourth in the standings.

Ethan Smith v Jerome Chipol – As expected this game was going to be very nervy for both of them as this was definitely the most important game they have played in all season. The first four legs of the game all went with throw meaning the game went to a last leg decider. The last leg went all the way to the wire and both players had darts to win the match but in the end it was Ethan Smith who held his nerve to hit double 5 to win the match 3-2, the most important double 5 he will ever hit in his career, well done.

Commiserations to Jerome as this is a very hard defeat to take but unfortunately someone had to miss out, but one thing for certain is that Jerome will bounce back from this defeat and comeback even stronger next season as he is a brilliant player.

Jeremy Cruz caught up with the winner Craig Galliano after the final..

Craig, you are the 2018 Youth National Champion, you must be really happy with this achievement?
“Yes of course, winning this tournament is a great achievement as this is the one that everyone looks forward too at the beginning of the season.”

In your first game today you defeated Justin Hewitt, a player who has been on great form throughout the season and up to today has played in all the ranking finals. You fired in two 15 dart legs in the game, did this performance give you confidence to go all the way and win this event?
“Well Justin is not just a great dart player he is also a good friend of mine and I know that on his day he is unstoppable so I had to really focus to win this game. Those two 15 dart legs not only gave me confidence but it also helped me win the game. For me not being a seed has been tough as I usually get a tough player in the First Round, so once I win my first game I can relax going onto the next games. After this performance against Justin I believed I could go all the way and win the event.”

In the final you faced Sean Negrette, another player who is currently on form after winning back to back ranking events. In the first leg you managed to break the throw with a brilliant 80 finish, at this point did you think that final was going to be yours to win?
“Just like Justin, Sean is not only a class player but also a great friend. Its hard when you play a good friend but once your on the board the only goal is to win the game. Before the game had started I believed in myself to win this game as I had been playing well throughout the day, that 80 checkout gave me a huge boost to control my nerves and play more calmly.”

Well now that the Youth League is almost finished for the season, you will now be focusing on the senior ranking events, you are currently 4thin the standings with two more events to be played and you are in contention of booking yourself a place at next year’s World Cup or at the Mediterranean Darts Cup which are both Senior events, this would be a huge achievement for you, wouldn’t it?
“Yes of course, I’ve managed to win the National Champion event for a second time now and I have also won the Youth League three seasons in a row so now my focus is on the Senior Rankings and try my best in the remaining events to try and secure a place in the top 4. Playing in the Senior Rankings has given me a lot of experience and it would be an amazing achievement for a youth player to qualify for one of these big tournaments.”

Finally Craig, last year the youth squad managed to pass the group stages at the European Youth cup which was a great achievement, are you confident you guys will do even better this year?
“Last year was an unbelievable achievement for all of us, none of us expected it. As for this year I think that if we focus and train hard in the upcoming months we could go even further this year and who knows hopefully we can bring back a trophy!”

Below are the final standings of the 2017/18 Youth Rankings.. 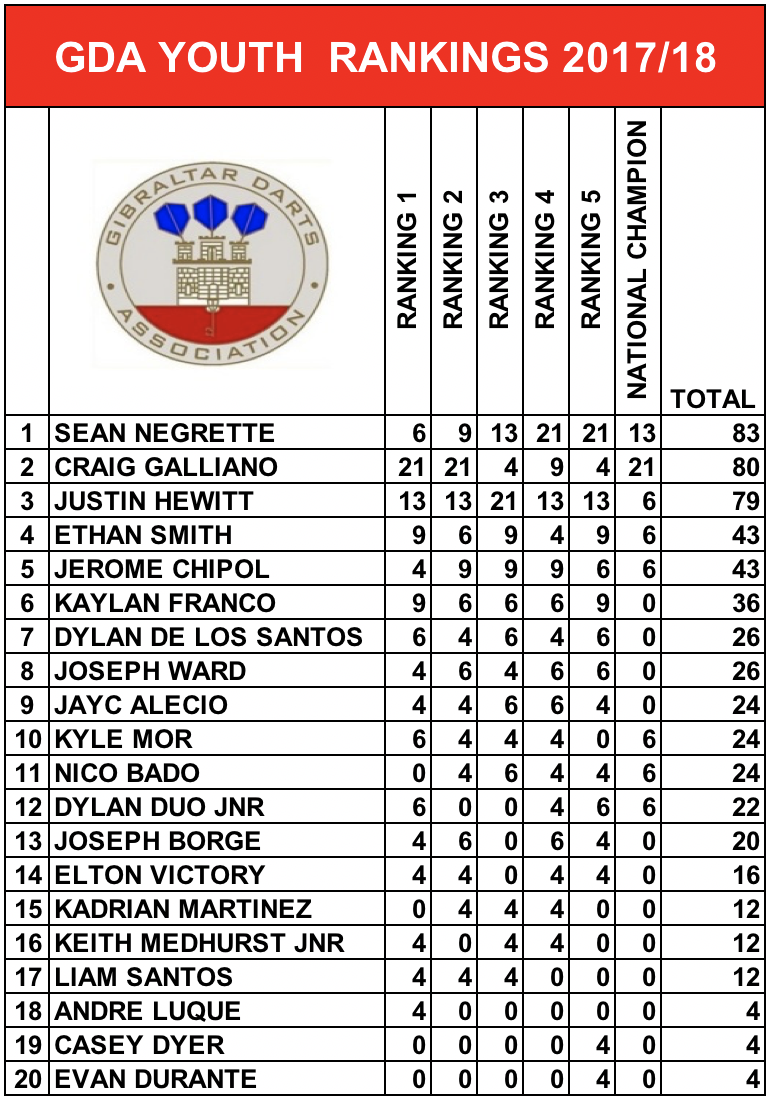